Week Fifty-One - Blessed is He Who Obeyed 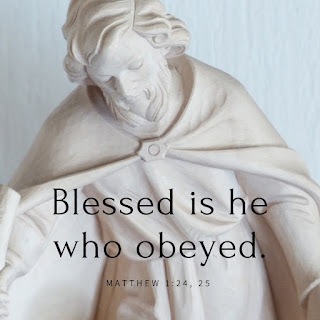 We've been talking about Luke 1:45, where God's word says of Mary, "Blessed is she that believed." Mary, the little Jewish girl, betrothed to Joseph, waiting for her wedding day, is now faced with an angel with a rather unsettling announcement. In the face of unalterable change, what did Mary believe?

As you read, you see she had favour with God; she knew the circumstances were out of her control and that God was at work, and this work included her. She believed God would take care of the details, and God had provided support through Elizabeth. The angel assures her that nothing was impossible with God, and she agrees that God's word must be fulfilled, surrendering her life to God's plan (Luke 1:30-38).

As she speaks to Elizabeth, we can see Mary's view of God. Just look at what she knows. She knows God as mighty and holy, merciful, strong, of great power, caring, and her only help (Luke 1:49-54). And with that belief in her God and his word, she surrenders.

But today, let's also look at Joseph. He, too, was godly. The Bible calls him a just man. Yet, his life was greatly affected by the news from the angel. He was ready to set up home with his fiance. No doubt, he was preparing and excited, but when Mary tells of the angel's visit Joseph is forced to make a decision. What will he do? He knows what the Jewish law says, but his love for Mary and desire to protect her causes him to think carefully before he acts. There was no sudden outburst from this man! He is so disturbed that even his dreams are affected. And in one dream, an angel appears, giving him a direct command. "Fear not to take unto thee Mary thy wife: for that which is conceived in her is of the Holy Ghost" (Matthew 1:20). And Joseph, by faith, obeyed.

He seems to disappear as the Scripture moves to the events with Herod and the Wisemen in the book of Matthew, but in the book of Luke, we see Joseph obeying the law and taking his young wife, expectant with child, to Bethlehem to fulfill the taxes. Joseph is mentioned at the arrival of the shepherds, and then, with Mary at the giving of sacrifices in the temple marveling at the words of Simeon.

Matthew records one more important time when Joseph obeyed. After the visit from the Wisemen, when Herod's jealousy and anger decreed that all children under the age of two years were to be slaughtered, an angel again appears to Joseph with instruction to take Mary and baby Jesus into Egypt until it is safe to return.

Here is a man willing to obey God and lay aside his personal desires. It takes a genuine character and great faith to take on a calling. And this was Joseph's calling - to be the protector and provider for the Son of God.

As I think about Joseph, I imagine a man of strength and purpose, a man with a caring and gentle demeanor, but also a man of integrity and trustworthiness. This was no small task, and as he and Mary marveled at all that was going on, I can only believe they were in awe of their role.

Both Joseph and Mary believed, and both obeyed in the face of unexpected circumstances beyond their control.

What is our reaction to life-altering news? What do we believe? Mary's initial panic did not hinder her belief and obedience because she had a solid trust in God and His word. Blessed is she that believed. For all generations, the faith and action of this one young woman have been a beacon and example. Likewise, Joseph exhibited his faith and obedience as he stepped up to take on his God-given role with character and integrity.

So, the next time an angel brings you news or life throws you a curveball, be ready with a solid belief. The God who met with Mary and Joseph is also at work in your life. Will you be blessed and obedient in believing?

If you missed last week's blog, go back and read! We are looking at the belief of Mary and Joseph, and if you want to hear more, go over to YouTube and listen to more on Mary - Blessed is She that Believed, and Joseph - Blessed is He Who Obeyed. We will have one more on this theme - Blessed are They Who Receive coming next week.  Until then, I hope you are successfully preparing to celebrate the birth of our Saviour.  Catch you next week - Gail