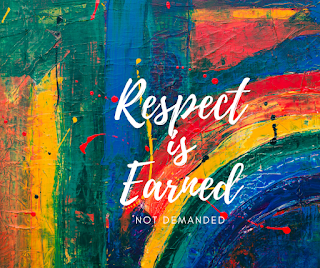 Respect is earned, not demanded. I hope I’m not the only mother who tried to teach this principle to their children. I’m sure I’m not!

When little ones stomp their feet or scream because they can’t get their way, that is not the time for parents to cowl under. It is time to teach them respect for authority. It doesn’t have to be heavy-handed, but it needs to be in a way that brings them back into control of themselves, and into submission to the situation.

When the teen starts howling and hurling language and attitude, that is also a time for parents to stand up and teach the difference between acceptable and unacceptable behavior. Sadly, if this lesson is not learned in the home, it becomes a hurdle for young adults as they try to navigate jobs, relationships, and society.

Earning your wings is vital. As I watched my teens get closer to leaving home, I began talking to them about earning the privilege of leaving home. As their parents, we needed to believe they knew how to act in public, handle money, take on responsibility, and become good citizens. We impressed upon them the importance of becoming a part of society and playing their role respectfully. Then, we could let them leave home.

Oh, they weren’t perfect, but they got out there and found their feet and earned the respect of their peers and us, as their parents. Such is the cycle of life, or as I believe it should be.

Respect is earned by keeping your word, showing responsibility, exhibiting good, honest character, and being the change—being the difference.

I believe it comes from two places. First of all, respect for authority—God’s authority first of all. Then, the authority of the various avenues of law, taxes, employers, etc. Many authorities in life are due our respect and cooperation. God says these authorities are there for our protection so we can live a peaceful life. 1 Timothy 1:9 tells us that law is given not for the righteous, but for the unrighteous—those that would defy authority.

If we disrespect authority, we can only expect to be judged by the law as lawbreakers. No amount of demanding or stomping our feet can change that.

The other place is learning respect for those around you. Some of us live in very multi-cultural communities. Others live in more singular cultural places. But one law of respect holds true throughout all cultures—treat each other as you would want to be treated. (The Golden Rule)

When we came to England, we had loads to learn about the culture. We got in and did our best to understand, and today, we are probably more British than American! When I married my husband, who is a Cherokee Indian, I had to learn about Indian culture. I wanted them to accept me and respect me as a person, so I had to do the same for them. In time, we have grown closer and closer. We have come to respect our differences and see the beauty of each.

I could not have entered either culture demanding they understand me first. I had to take time to watch, observe, talk, and try. That sort of sounds like growing up, doesn’t it? We grow in understanding when we try to understand! But when we stubbornly hang on to our ideas, we miss out and never gain the respect we desire.

I’m writing this today because I am concerned about the way things are going in society. It troubles me greatly to think that we have learned nothing from the riots in the 60s and all of the teaching schools have tried to do on ethnic acceptance. It bothers me that the screaming toddlers of a few years ago are now the screaming adults in the streets.

Parents, the onus is on us to teach our children to be respectful of themselves, of God, and others. Without that balance, humanity will continue stomping its feet and hurdling on its downward spiral.

Respect is earned, not demanded! Let’s teach our children how to earn it!