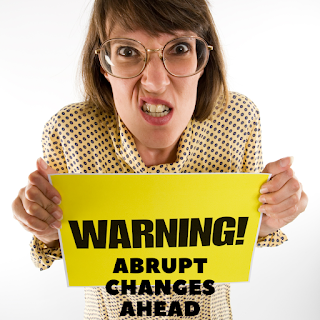 As if two years of the pandemic weren't shocking enough, now our pocketbook is taking a hit at the pump, war is looming, and things around us are growing more and more unstable as we hear talk of blackouts, strikes, and unrest. We are going to have to begin making some necessary adjustments for the abrupt changes ahead.
For the past two weeks, I referred to Mary's response to the angel's announcement - total surrender to the radical turning point in her life. I know none of us relish abrupt changes, and they aren't usually preceded by a visit from an angel, but we, like Mary, are still called upon to trust God even when we don't understand. So how do we do that? What can we learn from Mary?

The first clue is Mary's reference to herself as the handmaid of the Lord. Handmaid is the same word as bondservant. It is defined as "one whose will was not their own but who rather was committed to another. The slave was obligated to perform the master's will without question or delay." How many of us define our Christian attitude as one of bondservant? Do we see ourselves as slaves to Christ? Sadly, I don't think we really grasp the depth of this truth.

"A handmaid would sit silently and watch for hand signals from her mistress (Psalm 123:2). Through these motions, rather than any spoken command, the mistress would communicate her wishes. The handmaiden, having been trained to watch for these signs, would then obey them - without question or hesitation."

Mary, describing herself as a handmaid, says she has cultivated that attitude and mentality and is fine-turned in her attentiveness to God. Here's what Psalm 123:2 says, "Behold, as the eyes of servants look unto the hand of their masters, and as the eyes of a maiden unto the hand of her mistress; so our eyes wait upon the Lord our God, until that he have mercy upon us."  Mary was paying attention. "So, that day in Nazareth when God moved His hand and signaled His will, Mary, His devoted handmaiden, noticed. At the flick of God's finger, she responded."

What a beautiful picture of obedience and acceptance. But that's not all we can see from Mary's response. When you look at Mary's words of praise, you see her working knowledge of God. She knew Him through the books of Moses, the Psalms, and the prophets and had a deep reverence. Hers was not a shallow faith. No, she was well versed and strong, able to yield to the will of God.

That brings us back to Romans 11:33, "O the depth of the riches both of the wisdom and knowledge of God! how unsearchable are his judgments, and his ways past finding out!" This verse is quickly followed by the admonition of Romans 12:1,2 - to be a living sacrifice. Mary certainly yielded her life as a living sacrifice to something she did not understand, and today, we continue drawing strength and encouragement from her willingness.

So, when strange things happen, we need not fall apart (1 Peter 4:12, 13) but cast ourselves upon the Lord (Psalm 27:13, 14). Either God is in control of the changes in our lives, or He is not. Either I trust Him to provide, or I do not. Our response and attitude reveal our faith. Are you His servant? Are you attentive? Would you notice God's hand? Would you see the flick of His finger? Would you obey and accept the abrupt change as Mary did? Or would you kick, cry, and complain? Good questions to consider, I'd say!

Adapted from Loving God with All Your Mind, by Elizabeth George