Week Five - When Life Gets Wonky 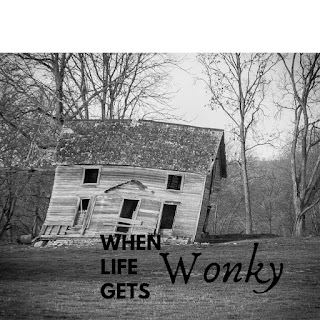 I sit writing today from a tiny house on my family farm in Missouri. With the passing of my mother-in-law, life placed us back with our family for an extended period. The disruption of normality, and the uncertainty created by traveling during COVID-19, leaves me trying to create a temporary normal and wondering how things will work out. Life just got wonky, as if the current pandemic hadn’t already done the trick!

But you know what? That’s okay. Life happens. I got to thinking about several Bible characters whose lives went wonky. Joseph, for example. He was the favorite son to a rich and loving father, but he found himself hated by his brothers, thrown in a pit, sold to some hairy Ishmaelites, and a slave in Pharaoh’s house. The wonkiness did not stop there. Prison became his fate, then an extended drought, and he never returned alive to the place he started.

Daniel started out in a rich, educated Jewish home, but found himself in a foreign training camp separated from his family. He, too, never returned. Life brought him under service to King Nebuchadnezzar and into a lion’s den- that’s definitely a wonky place.

Esther. After the death of her parents, she was cared for by a loving and wise uncle, but then, life took a wonky twist and she found herself in the palace, threatened by evil Haman, and her life, too, never returned to the peaceful normal where she started.

We could think of Nehemiah, who really wasn’t an architect or builder, but faced the prospect of organizing a bunch of untrained people to build as he endured the laughter and taunting of bullies and the underhandedness of the political swamp.

Mary and Joseph saw their ideal love story interrupted for all eternity by one visit from the angel and the Apostle Paul’s career was forever altered by one blinding light.

Wonkiness seems to be just a part of life. As my brother reminded me, “There is only one constant in life – change.”

So, what are we to do when life takes a deviation? Some of us throw up our hands and fall down in despair. Others get angry and try to drive life back into the desired path. But I like the attitude of the Apostle Paul when he said, in Acts 20:24, “But none of these things move me, neither count I my life dear unto myself, so that I might finish my course with joy.”

As I talked about this idea of wonkiness with my husband, he shared that he, too, had been thinking about a similar idea. He had drawn the prospect that nearly all these Bible characters I mentioned were young people – teenagers. When life put challenges before them, they were held up by the truth they had learned from parents and the character that had already been placed within them. The depth of their character was revealed in their response to difficulty. That begs the question, “Are we preparing our children for the future? Putting strength and character in their lives that will help them endure trials and make strong, godly decisions? Let’s hope so.

As I looked at wonkiness, I saw that in each case, they narrowed their vision. They looked straight forward. Scriptures like Proverbs 4:25-27, “Let thine eyes look right on, and let thine eyelids look straight before thee. Ponder the path of thy feet, and let all thy ways be established. Turn not to the right hand nor to the left: remove thy foot from evil,” came to my mind.

I’m sure you can think of other Scriptures that instruct us to keep our eyes on the Lord, to follow the light of His path, and not allow the whirling of the world to distract. Scripture gives us guidance and encouragement when life goes wonky.

Life happens. Things change. And when life starts pulling us to and frow, when the stormy winds rock our boat – we need to narrow our vision. Like the Israelites of old, when life gets wonky and we feel pinned in, God will take us through the water on dry ground, if we keep our eyes consistently looking straight forward to Him.