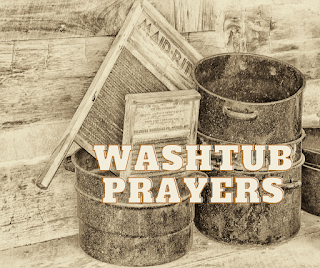 As we come Beside the Well today, I simply want to share with you the devotion from Springs in the Valley, August 25, because it spoke such hope and joy to my heart.

"An old woman with an halo of silvered hair--the hot tears flowing down her furrowed cheeks--her worn hands busy over a washboard in a room of poverty--praying--for her son John--John who ran away from home in his teens to become a sailor--John, of whom it was now reported that he had become a very wicked man--praying, praying always, that her son might be of service to God.  What a marvellous subject for an artist's brush!

The mother believes in two things, the power of prayer and the reformation of her son.  So while she scrubbed, she continued to pray.  God answered the prayer by working a miracle in the heart of John Newton.  The black stains of sin were washed white in the blood of the Lamb. "Though your sins are like scarlet, they shall be as white as snow" (Isaiah 1:18).

The washtub prayers were heard as are all prayers when asked in His name.  John Newton, the drunken sailor, became John Newton, the sailor-preacher.  Among the thousands of men and women he brought to Christ was Thomas Scott, cultured, selfish, and self-satisfied.  Because of the washtub prayers, another miracle was worked, and Thomas Scott used both his pen and voice to lead thousands of unbelieving hearts to Christ--among them, a dyspeptic, melancholic young man, William Cowper by name.

He, too, was washed by the cleansing Blood and in a moment of inspiration wrote:

There is a fountain filled with blood,
Drawn from Immanuel's veins,
And sinners plunged beneath that flood,
Lose all their guilty stains.

And this song has brought countless thousands to the Man who died on Calvary.  Among the thousands was William Wilberforce, who became a great Christian statesman and unfastened the shackles from the feet of thousands of British slaves.  Among those whom he led to the Lord was Leigh Richmond, a clergyman of the Established Church in one of the Channel Islands.  He wrote a book, The Dairyman's Daughter, which was translated into forty languages and with the intensity of leaping flame burned the love of Christ into the hearts of thousands.

All this resulted because a mother took God at His Word and prayed that her son's heart might become as white as the soapsuds in the washtub."

Dear friend, if you have a wayward child or a lost loved one, never cease praying.