Week Thirty-One - Scarecrows in the Field 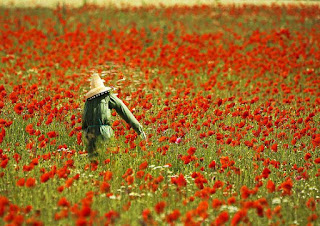 I remember seeing scarecrows in my grandfather’s gardens.  You know what they are—straw men on sticks placed to frighten away birds and varmints from crops.  Sometimes, they aren’t even shaped like men.  They can be aluminum plates left to dangle from a stick and blow in the wind.  But the goal is the same, to frighten things away.
Hannah Hurnard, in her book, The Hearing Heart, makes mention of a scarecrow that caused her to take a second look at God’s call upon her life.  “Indeed, I considered that aspect of the matter (her health or nervous temperament) with great apprehension and the Enemy made a great ‘Scarecrow” out of it.” (p 55)
Do you catch the correlation?  Just as the physical scarecrow is set in the field to deter those who would enter, the enemy sets scarecrows in front of God’s servants to deter them from going out into the field.
They can take the form of excuses why we can’t do things for the Lord or times when we are afraid to move forward by faith because the enemy has filled us with doubt and questions like What if I don’t know what to say?  What if it all gets too hard for me?  What if I fail?  What if I don’t have enough support?  What if I can’t learn the language?  What if people laugh at me?  What if…What if…What if…?  Or maybe they are taunts like: You aren’t really called.  You will never be good enough.  No one will like you.  You can never do that.
These questioning scarecrows seem so very real.  We see them in our mind and it feels like we almost touch them!  They haunt us at night producing genuine anxiety but we need not let them deter us from obedience or cause us to sidestep in faith.
Here’s the thing about scarecrows—they aren’t real.  They are imagined danger.  And they aren’t restricted to those going out into the mission field, as in Hannah Hurnard’s case.  They are there for every Christian who is seeking to follow and obey the Lord’s direction.  Every Christian who is trying to find their way.  The enemy does not want us in the field!
One more thing about scarecrows—there will always be scarecrows in a productive field.  There is no need for them on wasteland.  That is all the more a reason to recognize them for what they are—they are the enemy’s attempt to keep us from enjoying the fruit of our service and destroy the work of God in our life.  Call them what they are—lies and fears.
Ms. Hurnard went on to write:  “As with the virgins in the parable, so with the birds in the field, there are two kinds, the wise and the foolish. A wise bird knows that a scarecrow is simply an advertisement. It announces in the most forceful and picturesque way that in the garden, which it is doing its best to adorn, some very juicy and delicious fruit is to be had for the picking. There are scarecrows in all the best gardens. Every thoughtful bird learns in time to regard a scarecrow as an invitation to a banquet. He feels as a hungry man feels when he hears a dinner bell ring and swoops down upon the delicacies to which the scarecrow calls him. If I am wise, I too shall treat the scarecrow as though it were a dinner bell. Every giant in the way which makes me feel like a grasshopper is only a scarecrow beckoning me to God’s richest blessings. Faith is a bird which loves to perch on scarecrows. She knows there are scarecrows wherever there are strawberries. All our fears are groundless.”

So, the wise worker pays them no mind.  He casts them down and moves on by faith bringing them before the Lord and using the weapon of the word against their taunts. (2 Corinthians 10:5  “Casting down imaginations, and every high thing that exalteth itself against the knowledge of God, and bringing into captivity every thought to the obedience of Christ.”)
Don’t be afraid of scarecrows when your Father has sent you into the field.  He knows that’s where the fruit and blessings are! You have a calling that supersedes and a mandate that validates. (Mark 16:15 “Go ye into all the world, and preach the gospel to every creature.”)